You are here: HomenextTopicsnextPort of ClarenextShipping at the Port of Clare - the s.s. Briarthorn

Shipping at the Port of Clare - the s.s. Briarthorn 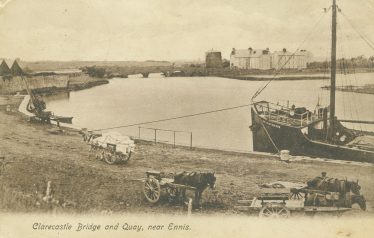 zoom
This postcard shows the SS. Brier Thorn tied up at Clarecastle Quay in about 1927. Postcard - CBHWG

This postcard shows the SS. Briar Thorn tied up at Clarecastle Quay in about 1927.

The photograph has a fine view of the quay area, the Castle and Barracks, the old Clare Bridge and the crane, three gandalows can be seen tied to the quay- wall and the glasshouses in Sheedy’s orchard can be seen on the upper left of the image. A frame for drying salmon nets is in the centre.

The ship was built in Aberdeen by Alexander Hall & Co. in 1910 and was 459 tons, with a length of 155 feet.  She was a frequent visitor to Clarecastle in the 1920s, with coal. On 2 April 1927, she brought in a general cargo for Dan McInerney’s in Ennis and it may have been the occasion when this photograph was taken.

On 31 December 1938, on a voyage from Ayr to Coleraine, with a cargo of coal, the ship was wrecked in the River Bann.