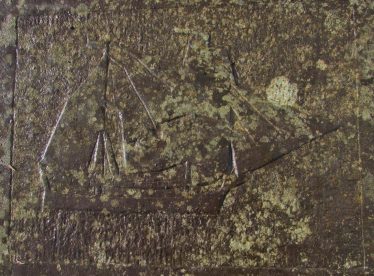 zoom
Daniel Kelly gravestone - detail - Clondegad Graveyard
Eric Shaw
In Clondegad graveyard, there is a gravestone to Daniel Kelly who died in 1858 aged 23. The stone was erected by his father, Timothy Kelly of Clarecastle. On the stone is a fine etching of a two-masted sailing ship and the words ‘The Master of the Mariner’.
Daniel Kelly was a sea captain in the navy service and died leaving a young wife, not named. The Kellys were coal merchants in Clarecastle and a brother of Daniel’s, Pat,  became Harbour Master there.  They also appeared to have connections to Clondegad.
For the  story of Daniel Kelly and of his son, Michael Kelley, click on the link below.