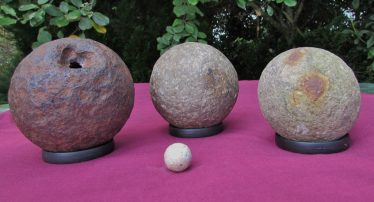 This stone object was presented to Eric Shaw by a local man, Chris Crosby, who had found it under the flyover on the N85[i] at Clare Abbey on 18 August 2017.

It may be a possible 16th/17th-century stone cannon ball, probably of granite. The ball is sub-spherical in form, with an uneven surface. It is between 70mm and 80mm in diameter and weighs 535g. It has three iron stains on its surface and is pitted in places with what may be limestone. No  impact mark is visible.

“The castle in Clarecastle was occupied by Crown forces during the rebellion of 1641, by Cromwellian forces in the 1650s and again by Jacobite forces during the ‘War of the two Kings’ in 1688-91. There is no documentary evidence that Clare Abbey was ever garrisoned, but it is unlikely that a large, defensible masonry building – and moreover one with a tower- would not have been exploited as a strong place and billet during one or more of these conflicts. This would account for the discovery of a number of artefacts of military character during the excavations in 2006.”[ii]

A round shot (or solid shot, or a cannonball, or simply ball) is a solid projectile without explosive charge, fired from a cannon As the name implies, a round shot is spherical; its diameter is slightly less than the bore of the gun from which it is fired.

Round shot was made in early times from dressed stone, referred to as gunstone but by the 17th century, from iron. It was used as the most accurate projectile that could be fired by a smoothbore cannon, used to batter the wooden hulls of opposing ships, fortifications, or fixed emplacements, and as a long-range anti-personnel weapon.

Stone cannon balls were used before and alongside iron ones;
they were even used at sea. The stone cannon ball was cheaper than the iron version and did more damage to troops as they shattered easier, and took more men down.

In land battles, round shot would often plough through many ranks of troops, causing multiple casualties. Unlike the fake gunpowder explosions representing roundshot in movies, real roundshot was more like a bouncing bowling ball, which would not stop after the initial impact, but continue and tear through anything in its path. It could bounce when it hit the ground, striking men at each bounce. The casualties from round shot were extremely gory; when fired directly into an advancing column, a cannonball was capable of passing straight through up to forty men. Even when most of its kinetic energy is expended, a round shot still has enough momentum to knock men over and cause gruesome injury.

Round shot has the disadvantage of not being tightly fitted into the bore (to do so would cause jamming). This causes the shot to “rattle” down the gun barrel and leave the barrel at an angle unless wadding or a discarding sabot is used. This is known as ‘windage.’

The photo above shows:

2-pound stone cannonball found by Noel Guinnane in the 1960s in an old disused water tank at the rear of Clare Castle, close to the latrines.

1-pound stone cannonball found by Chris Crosby under the M18 Flyover over the river Fergus close to Clare Abbey.

A lead musket-ball found by Mickey Kerrigan in an embankment in Islandmcgrath during the hard winter of 2009, where the British Army had a shooting-range in the 1860s. A large number of lead minie-bullets were found in the same location.