You are here: HomenextTopicsnextPort of ClarenextShipping at the Port of Clare- m.v. Dicky

Shipping at the Port of Clare- m.v. Dicky 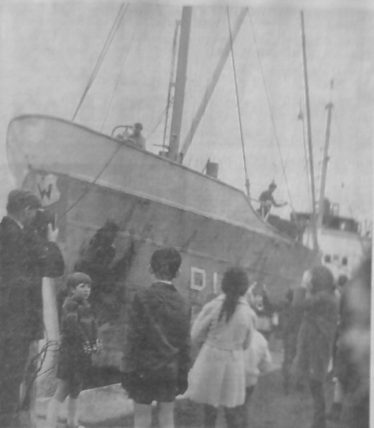 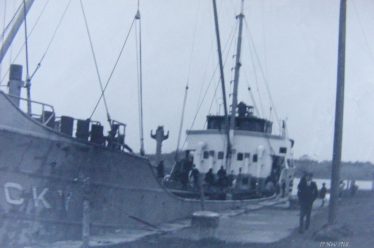 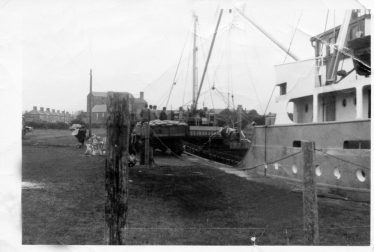 Mary Morrissey showed me these fine photographs that belonged to her late husband,
Matt Morrissey. From the photographs, I was able to identify the ship as the m.v.
Dicky. We are fortunate that some shipping records for the Port of Clare exist and I
was able to locate the ship in the records and research the story behind the
photographs. The records show that the m.v. Dicky arrived in Clarecastle on the 17
November 1968 from Antwerp with a cargo of 600 tons of basic slag for North Clare
Creameries.

The Clare Champion of 23 November 1968 reported that the ship was the first
to use the quay in six years. It was due to leave for Norway on Tuesday evening but
was delayed by fog and left on Thursday morning with a cargo of ore from the
Silvermines. The m.v. Dicky had a crew of six plus Captain Wagenborg of
Amsterdam on board. Twelve dockers, one stevedore, two wenchmen and local
helpers assisted in the unloading, and a fleet of privately owned and C.I.E. lorries
brought the slag to the various branches in North Clare.

History would show that the m.v. Dicky was the second-last ship to use the
quay in Clarecastle. The m.v. Sisu arrived on 26 June 1969. Its departure marked the
end of the Port of Clare as a trading port.

We are very grateful to the Morrissey Family for allowing us to copy the two
fine photographs. One other photograph of the same ship, below, had been given to us
some time ago by Des Ryan. The three images are now part of the story of the Port of
Clare in times past and are wonderful treasures of the Parish.