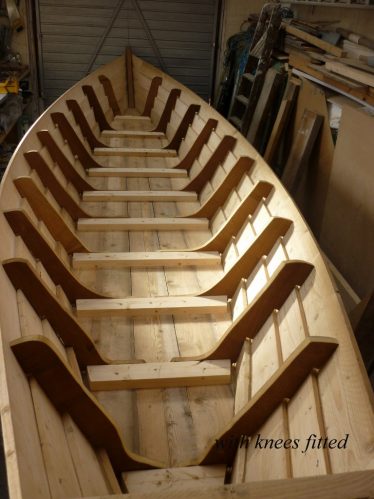 With the buyout of the net salmon licences by the Government in 2006 in order to conserve salmon stocks, the traditions and skills require to build the fishing boats in Clarecastle are in danger of being lost. It is therefore most important to record and film these traditions for posterity.

The boat used by the Clarecastle net-fishermen for many years was known as a gandalow, a design of boat used in the Fergus and Shannon Estuaries. An 1840 drawing of the Quay shows a gandalow on the river. The boat is keel-less and with the spring in the floor, it is ideal to manoeuvre in shallow water or over the mud flats. It was about 21 feet in length and about five feet across, mainly made of white deal, with teak used for the bow, stem and knees. Up to recent times, there were 14 drift-net licences and about five draught-net licences held by families in the village. The drift-net went with the tide. The draught-net was paid out in a circle and it took two men to operate that system. The drift meant the distance between one fishing boat and the next and is reflected in many of the names used to identify points in the river. John Scanlan and Flan Considine still build an occasional gandalow and it is important to record their work for posterity.

Two large punt guns were brought to Clarecastle in 1889 by a Dublin business man, George Vincent, who had married Mary J. Callanan, daughter of Sinon Callanan of Clarecastle. The couple lived in Knockinamana for about ten years. The Vincent family later lived in Dysart. They moved to Dulwich in 1908. George Vincent died there in 1958, aged 91. The guns were last fired over 50 years to shoot duck and geese on the Fergus Sloblands and were mounted on a punt boat.

The Heritage & Wildlife Group was generously presented with a punt boat that was made in the village in the 1960s by the late Tommy Considine and which is in good condition. The Men’s Shed renovated the punt boat which has original oars and paddles.

In 2022, Clarecastle Men’s Shed was commissioned to build a punt boat for a client. This is the first punt boat built in Clarecastle since the 1960s and the Heritage & Wildlife Group took the opportunity to photograph the building of the boat and record the skills and traditions that are in danger of being lost. Recycled teak and mahogany woods were used in the making of the frame of the boat as far as possible.