You are here: HomenextTopicsnextPort of ClarenextShipping at the Port of Clare - s.s. Queen's Channel

Shipping at the Port of Clare - s.s. Queen's Channel 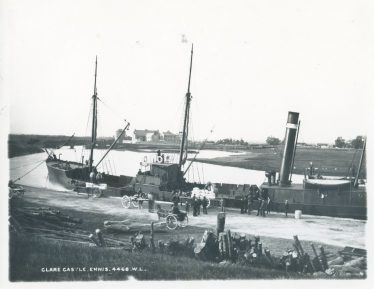 This iconic photograph taken by William Lawrence gives a wonderful view of the quay area, the Castle and Barracks and the five-arched Semple bridge, with Clare Abbey in the distance. It is one of two photographs of the same scene, taken from slightly different angles and times and probably dates to the very early 1900s.

The ship tied up at the Quay can be identified as the SS. Queen’s Channel, a ship that was built in Workington, Cumbria in 1894. According to Lloyd’s Register 1904-05, the master of the ship in 1903 was J.H. Farlam. The registered tonnage of the ship was 370 tons and it was of iron and steel, with a steam engine. The days of sailing ship was almost at an end, with masts and sails can be seen on the ship. The owners of the ship were Queen’s Channel SS. Co. Ltd. (J. Edwards & Co.), 17 Water Street, Liverpool and it was registered in Liverpool. The ship was 153 feet in length, 23 feet wide and had a depth of 9 feet.

By way of comparison, the SS. Keeper, the subject of the recently unveiling Memorial at Clarecastle Quay, was a larger ship of 570 tons and with a length of 179 feet.