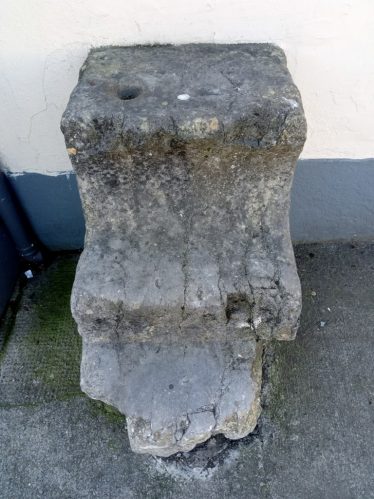 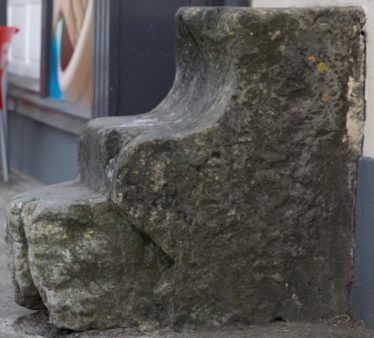 This stone is familiar to most people in the Parish. It presently stands in Barrack Street, Clarecastle but according to folklore, it may have been in the Main Street in front of the three-storey building on the right. . Originally, it had the higher side of the stone in a position that a horse could be brought to stand in front of the stone.  The block was used by the intending horse-rider climbing the steps and on reaching the top throwing his right leg over the horse. Curiously, it seems likely to be the only surviving example in Ireland. The mounting-block is well worn, showing signs of use over a considerable period. The bottom step is damaged, perhaps when it was being moved sometime over its long life.  Mounting-blocks such as that at Clarecastle are well-known in Britain. Undoubtedly there must have been others too in Ireland, but none seem to have survived.

One of the reasons why mounting-blocks are not as frequent as might be expected is, of course, that many, perhaps most of them, were made of wood, not stone. Clarecastle has a precious monument, perhaps unique in Ireland, at its very centre, one which deserves greater renown and careful protection.

In the Other Clare Journal, Vol. 15, of 1991, Etienne Rynne presented a scholarly paper on this artefact. In the paper, he states that the block is perhaps 200 year old and is unique in its rarity and historical value. Mr Rynne ends his paper with the following sentence “Clarecastle has a precious monument, perhaps unique in Ireland, at its very centre, one which deserves greater renown and careful protection”. The full article can be read below.

When viewed in profile, the stone can be seen to have curiously shallow steps, with a convex curve set in to the top step. A large v-shaped cutting can be seen on the right-hand side of the stone. If the stone was turned over, it has all the appearance of a large, carved corbel-stone. Perhaps the stone had an earlier use.