You are here: HomenextTopicsnextPlacesnextClarecastle Punt Guns 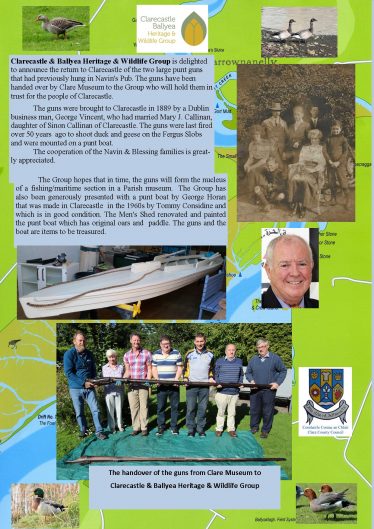 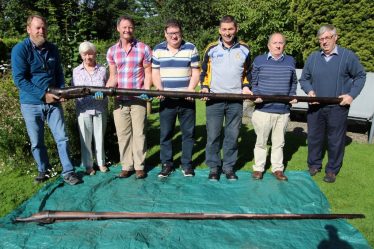 Clarecastle & Ballyea Heritage & Wildlife Group is delighted to announce the return to Clarecastle of the two large punt guns that had previously hung in Navin’s Pub. The guns have been handed over  to the Group who will hold them in trust for the people of Clarecastle.

The guns were brought to Clarecastle in 1889 by a Dublin business man, George Vincent, who had married Mary J. Callinan, daughter of Sinon Callinan of Clarecastle. The couple lived in Knockinamana for about ten years. The Vincent family later lived in Dysart. They moved to Dulwich in 1908. George Vincent died there in 1958, aged 91. The guns were last fired over 50 years to shoot duck and geese on the Fergus Sloblands and were mounted on a punt boat.

The Group hopes that in time, the guns will form the nucleus of a fishing/maritime section in a Parish museum.

The fact that Pat Navin had the interest to preserve these old guns, to maintain them and to have them on display in his pub for over 50 years, has meant that they have survived as part of the Clarecastle fishing and hunting lore. The generosity and cooperation of the Navin and Blessing families is greatly appreciated.

The Group has also been generously presented with a punt boat that was made in the village in the 1960s and which is in good condition. The Men’s Shed renovated the punt boat which has original oars and  paddle. The guns and the boat are items to be treasured.