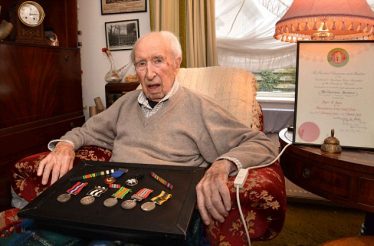 Clarecastle in WW2 – The Emergency – by Ger Browne

Lt Doctor Willie Navin: ‘Dr William Navin was born in Clarecastle in 1913. He was awarded seven medals for his service during WW2 when he saved countless lives as a Medical Officer for the 12th Warwickshire Battalion. Dr Navin, who worked as a G.P. until he retired aged 72, was a Lieutenant during WW2 and risked his life to save Coventry Cathedral from Nazi bombs. Dr Navin died in November 2013 in his 100th year.’ (Clarecastle & Ballyea – Land and People)

Lt.Cdr. Tobias Joshua Aloysius (Spike) King Joyce: Newhall, Ballyea. (1916-1948). Royal Navy, C Squadron A & AEE TP. Pilot on the Ark Royal aircraft carrier during WW2. He died on the 22nd June 1948 when he was test piloting the concept version of the British Navy’s first ever jet fighter – the Supermarine Attacker, at Durrington, Amesbury, Wilts. He is buried in Boscombe Downs, Wiltshire, England.