Netta O'Brien Sheedy Autograph Book in film
The Book contains signatures that Netta O'Brien Sheedy collected from people who were involved in the 1916 Rising and some of whom went on to play major roles in the War of Independence, the Civil War and in the later political life of the new State. 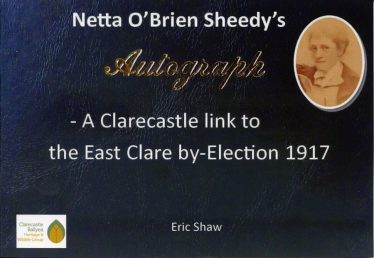 Clarecastle & Ballyea Heritage & Wildlife Group has marked a 100 year-old link between Clarecastle and the East Clare By-Election of 10 July 1917 with the publication of its latest booklet, Netta O’Brien Sheedy’s Autograph –A Clarecastle link to the East Clare By-Election 1917 by Eric Shaw of the Group. This follows the kind presentation to the Heritage Group of a rare autograph book from the early 1900s and which was found to contain the signatures of many of the personalities that were present in Ennis for the By-Election in July 1917.

Annette (Netta) O’Brien was the daughter of Patrick O’Brien and Kate Coghlan of Carnelly and later of Bridge House, Clarecastle. She was born in 1876. Patrick O’Brien was the owner of the Clare Sawmills, and was a coal and timber merchant in the Quay Road. He owned property in the Main Street and Quay Road and imported timber and coal in through the Port of Clare. In those years, William Carroll was also importing timber from Canada for his sawmills in Ennis and Patrick Power was importing coal.

In the early 1900s, Netta kept an autograph book and in the years that followed, she collected poems and verses from her friends.

The little book measures 5½ by 4½ inches. It is cloth-bound and originally the book had different coloured pages. These have largely faded. There are some interesting signatures that she collected from people who were involved in the 1916 Rising and some of whom went on to play major roles in the War of Independence, the Civil War and in the later political life of the new State. Netta and Kitty O’Brien were active members of the 1st (Ennis) Battalion Mid-Clare Brigade of Cumann na mBan. Also Netta may have been in a position to collect these signatures from her friendship with Canon O’Kennedy.

The book is now on sale in local outlets and Ennis Bookshop, price €5 and is likely to become a collector’s item in Clarecastle and in the County of Clare and beyond.

The Autograph Book can be viewed below.

The Autograph Book in Film:

The Group has now decided to bring the story alive in the form of a short video, highlighting the famous signatures that can be found in the book. The video is an ideal way of bringing history alive for the people of Clarecastle, the County of Clare and indeed the whole country. It helps to preserve the historic signatures in a new medium that will ensure their survival on our website and through our membership of the iCan project.