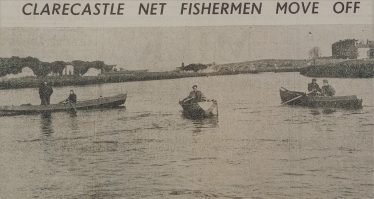 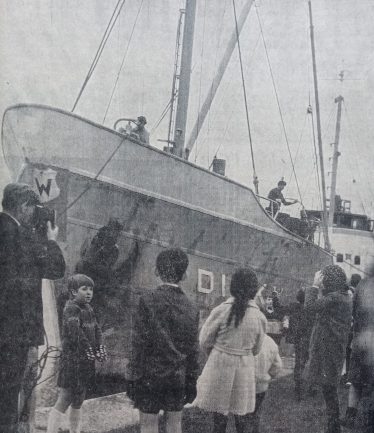 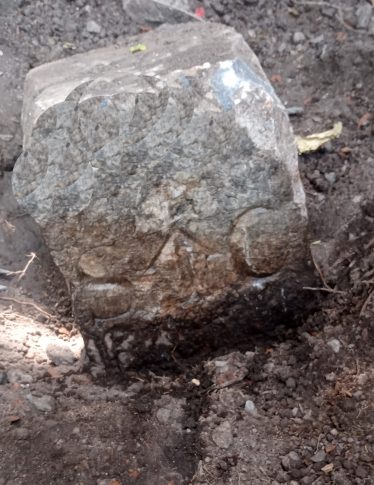 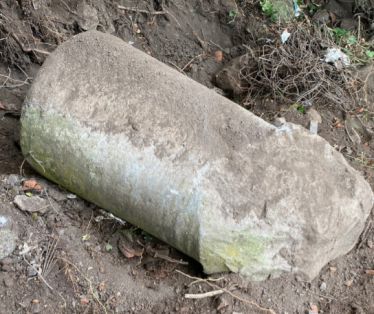 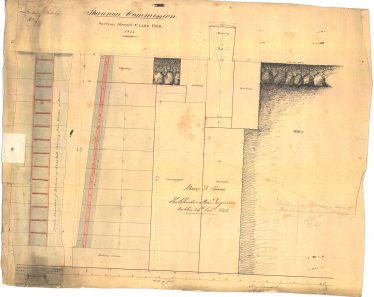 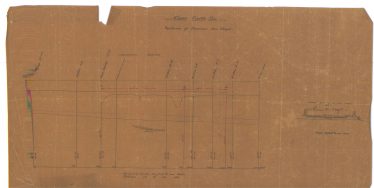 This was the chief port for mid-Clare. The range of goods exported from the port here was extensive and included oats, wheat, butter, timber, flour and lead ore from the Ballyhickey Mines for smelting in Wales. The main imports were coal and timber. Trade was mainly with British ports such as Liverpool, Glasgow and London. There was a weekly steamship service to Limerick port in 1836. The main quay was built in 1845 and the lower wharf in 1881.

If one stands on the bed of the river when the tide has fully stripped out, the scale and workmanship of the crescent-shaped quay in Clarecastle can be fully appreciated. This wall of stone has borne the brunt of rough weather and tidal flows over the past 170 years and still looks as solid as the day that the foundation-stone was laid in 1843. The present quay incorporates an earlier structure erected by Sir Lucius O’Brien between 1763 and 1770. The above drawing is from a map entitled “Port of Clare – River Fergus” made by Lieutenants  J. Wolfe and R. B. Beechey and Mr. J. S. Taylor of the Royal Navy in 18401. It gives a good impression of what the O’Brien quay must have looked like and is also a wonderful, evocative image of the village, castle and barracks. A cutter is tied up at the quay with a long pennant flying from a tall mast, a stage-coach is crossing the fine Semple bridge and the fishing boat is similar to the present-date ganalow still in use on the river.

With the level of trade in the 1840s, the O’Brien Quay had become too short to handle the number of ships using the Port of Clare.  The Clare Journal of 7 April 18452 describes the O’Brien quay as “the old dilapidated quay” and the new quay as “ample and commodious”. The paper goes on to say “for during the time when the old quay was taken down, which commenced in July 1843, till it was finished in March 1845, sixty labourers were the average number employed. These men being now thrown out of employment, a great deal of privation must necessarily befall them and their families”. The redevelopment of the quay cost about £4,000. A plaque was erected at the northern end of the new quay, with the following inscription:

THIS QUAY was erected by THE COMMISSIONERS

Thomas Rhodes (1789-1868), was an English engineer. During the 1830s and 1840s Rhodes was engaged on a number of Irish engineering and surveying projects. As a member of a special three-man Commission set up in 1831 to report on the navigation of the Shannon, he made a survey of the river from Limerick to its source, producing his report in 1833. In 1839 he was engaged as the Shannon Commissioners’ principal engineer, a position which he held until 1846. In this role he was responsible for several major bridges, locks and weirs, including the bridge at Portumna, Co. Galway, and Banagher, Co. Offaly. Richard Grey was a Galway contractor.

The quay is about 512 feet in length and is 16 feet 3 inches in height. There are nine stone steps at the northern end and thirteen stone steps at the southern end. Four iron access ladders with twelve rungs are inserted in the face of the quay-wall. [The Clare Journal states that there were five iron ladders].  Seven finely-carved stone mooring-posts are spaced along the quay for the attaching of mooring lines. The limestone for the quay may have been quarried in Ballybeg. Large discarded blocks of stone similar to the ones used in the construction of the quay, can be found in the area of Carroll’s Quarry in Ballybeg today. The Limerick Chronicle of 9 April 1845 states that 5,416 cubic yards of rock and 7,922 cubic yards of clay and gravel were used in the construction of the new quay. The base of the quay is formed from a row of large cut stones that protrude slightly. The wall of the quay is constructed from rectangular ashlar limestone (dressed) blocks in regular courses which rise to ten courses in all. Some of these blocks of stone are quite large and it must have taken great effort and skill to cut and move these from the quarry to the edge of the river.

In the late 1880s, five gas lamps were installed along the quay. These fine cast-iron lamp standards can be seen in older photographs and they added greatly to the appearance of the area. In 1895, an iron crane was installed on a large block of concrete mid-way along the quayside. This remained in place until the 1960s when it was removed for scrap.

The unloading of ships at the Quay and the transporting of coal, timber and building materials in to Ennis provided welcome employment for the car-men of the village. The coming of the railway to Clare Castle in 1859 began to cause a drop in business followed by decline to the Port of Clare. World events such as the Great War and Second World War added to the drop in business. The last coal-boat was unloaded in 1961.

The large grain-stores, two old ship’s anchors and the quay-wall itself are reminders of an era that has passed. The buying-out of the net salmon licences in recent years has meant that the Quay is no longer a hive of activity but rather an area of leisure and a pleasant place for locals and visitors to walk. Old photographs of the Quay, shipping records and traditions to do with fishing, duck-shooting and boat-building, along with the memories of the people of the village should be recorded, preserved and treasured.

A large mooring-post was dug out of a bank of earth last week. Following the completion of the building of the Quay in 1845, the Clare Journal of 7 April of that year stated that ‘seven mooring-posts, made of limestone, were planted eight feet in the ground’.  There are still seven mooring-posts on the Quay but one is of a different design and it probaly replaced this stone that was damaged. This fine stone will be reset on the Quay.

Also discovered was a stone with the letters S and C on it, with a benchmark crow’s foot. The initials stand for the Shannon Commissioners who built the 1845 Quay and dates to that year. The area around this stone will be levelled and landscaped to make a feature of the stone. According to the 25 inch Ordnance Map, there was a 2nd stone like this in the same area and a further S & C  benchmark on the gatepost of the old O’Brien coalyard, all to be found.

Among new information signage being erected at the Quay by Clarecastle Tidy Towns and Clarecastle Heritage & Wildlife programmes for history and biodiversity at the Quay, you will see this road sign. The story behind it is as follows:

A new steamer dock was built in the lower quay area in 1837 called the Sir Lucius O’Brien Dock. The City of Dublin Steam Packet Co. set up a regular steam service between the Port of Clare  and Limerick in 1837, with the ‘Clarence’, a 92 foot-long paddle steamer.

The road today looks like a country lane but it was over 20 feet wide, with fine cut-stone walls on either side. It must have been a busy road with horse-drawn carriages bringing passengers and goods to and from the ferry, serving Ennis and mid-Clare. In the summer of 1838, a carriage awaited the arrival of the ‘Clarence’ from Limerick into the quay at Clare Castle to take passengers on to Lahinch and the Cliffs of Moher.

The stone walls are still largely there but hidden now by bramble and scrub. It would be nice to see a section of the walls cleared to show the road as it was back then.

The late Brian J. Goggin’s family have published a very handsome book in his memory. It contains a fine chapter on the Clarence ferry of 1837 and the proposed Wyndham Canal, both of great interest to Clarecastle. His wife Anne, has very kindly given us permission to upload that chapter to this site and it can be found below.