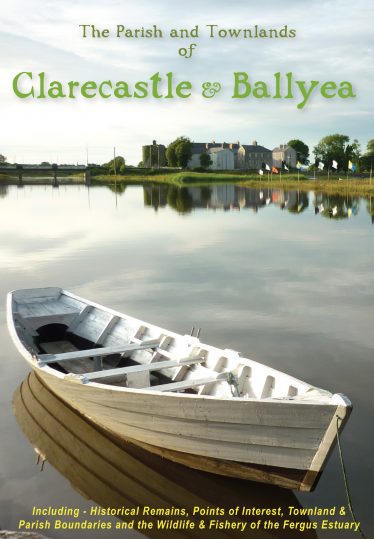 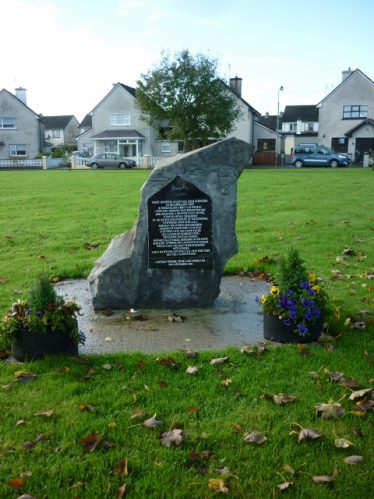 This was the year of ‘The Gathering’ and the group swung in to action with an extensive programme of activities to mark the year in the parish.

A large-scale map of the 49 townlands in the Parish was published by the group in 2013, which included items of historical interest for each townland shown. The reverse of the map captured the old names that the net salmon fishermen had on points of the river Fergus. These were in danger of being lost to memory following the buyout of the salmon licences in 2003.

There is no known mass grave for the victims of the Famine in the Clarecastle Ballyea area where the death toll is estimated to have been around 1,000 deaths. It was decided to remember our ancestors who had perished in those terrible years by erecting a Famine Memorial on the old Fair Green in Clarecastle. The location was chosen because of the events so harrowingly described that took place on the Fair Green in the Famine years. Mike McTigue was commissioned to carve the Memorial, based on an image Cabin of Pat. Macnamara, Village of Clare, originally printed in the Illustrated London News, 19 January, 1850. The words of Captain Wynne, the Poor Law Inspector for the Ennis Union, of the harrowing effects of Famine which he witnessed on Christmas Eve 1846 in this Parish, were inscribed on the Memorial:

‘I must, however, again call your attention to the appalling state in which Clare Abbey is at present. I ventured through that parish this day and although not a man easily moved, I confess myself unmanned by the extent and intensity of the suffering I witnessed, more especially among the women and children, crowds of whom were to be seen scattered over the turnip fields lake a flock of famished crows, devouring the raw turnips; mothers half naked, shivering in the snow and sleet, uttering exclamations of despair, whilst their children were screaming with hunger; I am a match for anything I may meet here, but this I cannot stand.’

On 14 July 2013, the Heritage and Wildlife group, with the kind permission of local landowners, led a unique walk from Clare Abbey to Killone Abbey along the ‘Rocky Road’ tracing the footsteps of the old medieval Pilgrim’s Road. This was a wonderful event in beautiful sunshine, walked by over 100 people, with refreshments kindly donated by the residents of Ballybeg.

Four wildlife surveys were undertaken by the group, led by Jean Ryan, around the Clarecastle Ballyea area, at the Quay in Clarecastle, Ballybeg Woods, and Killone and Clare Abbey.

An exhibition of old photographs was held during Heritage Week and a Village walk was guided by Dr Joe Power on 15 July 2015.